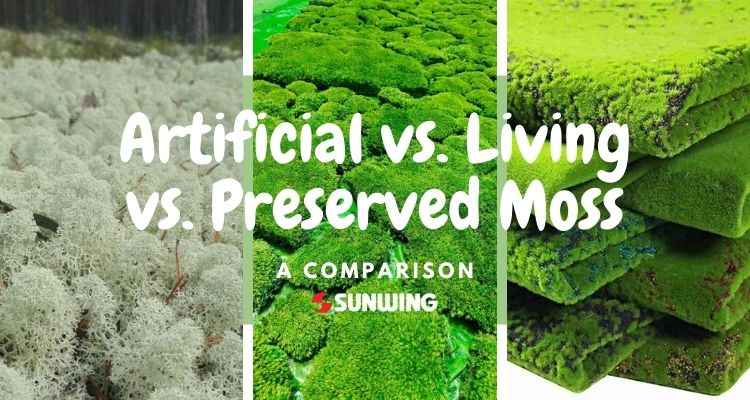 In this article, let Sunwing artificial plants introduce all moss ranges from artificial moss, preserved moss, living moss, and dried moss on their features and differences.

Artificial moss is an imitated form of real moss in life. They simulated the live moss looking and functions and can benefit all kinds of green walls or art-crafted work in every way.

While there are different kinds of fake moss walls, the fake moss range is also remarkable as well. They can even offer more rare moss forms for design in harsh environments. 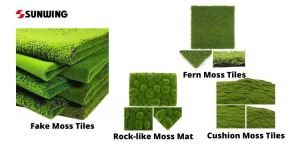 Living moss is freshly collected moss without any preservation. They will grow like in wild with first-class maintenance. Dried moss is a dried form of live moss and they can be rehydrated again to grow to a new plant.

Of course, the most popular living moss wall on the market is 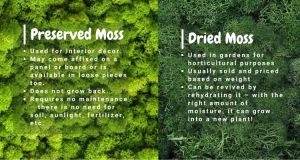 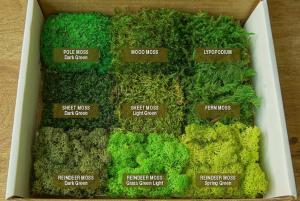 1. What is Preserved Moss?

Preserved moss is real moss that goes thru a natural preservation solution like glycerin to preserve its color appearance and natural elements for years.

The markets’ most popular preserved moss ranges are listed below: 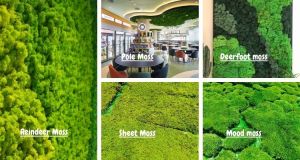 4. Can we install preserved moss everywhere?

Of course, preserved moss can survive without a strict living environment.

5. Where to buy preserved moss bulk?

If you plan to procurement preserved moss in bulk for business or projects, here is a full buying guide for your reference:

Most preserved moss manufacturers are from Europe where there are lots of wild forests and arctic lands perfect for growing moss lichens and since 2021, because of the climate changes and other predictable reasons, they are not able to feed the whole preserved moss markets and many preserved moss buyers begin to source out there. Here, China will be the place to go. It is the second biggest preserved moss exporter in the world.

-How to tell the quality of the preserved moss?

First of all, you have to know the difference between preserved moss and dried moss while dried moss got a shorter shelf life and requires costly maintenance to live long. Be sure to ask the following two questions before importing:

While the preservation may be costly and the price may be higher than those normally so-called preserved moss which can only keep its appearance for only 1-2 years.

6. How to make preserved moss?

The most common way to make preserved moss is using a natural solution of Glycerin. For industry production of preserved moss, there are simply several simple processes:

If you are interested in a DIY process for home preservation please refer to moss lovers’ article on how to make moss preserved at a home base.

Dries moss is a dehydrated form of live moss which is crispy than the live soft moss. They can both grow lively to some degree.

Unlike preserved moss, dried moss can be rehydrated to grow with certain moisture. Preserved moss will go through natural preservation and keep its appearance for many years without maintenance while dried moss may require lights, moisture, or sun for growing in certain environments.

Preserved moss walls and living walls can defer in their lifespan, maintenance required, and health benefits for well-being, etc.

Preserved moss will last over 10 years with a good preservation process while living walls lifespan will depend on the maintenance quality and its environments sometimes 3 years at most.

The live moss wall produces oxygen and purifies the air or indoor space which will have a good compact on well-being. The preserved moss lost its function of photosynthesis in process of preservation.

Compared to real moss preserved, the artificial moss walls are made of silk or fabrics. The preserved moss keeps its original green aspects and looks more natural than the mimic moss form. 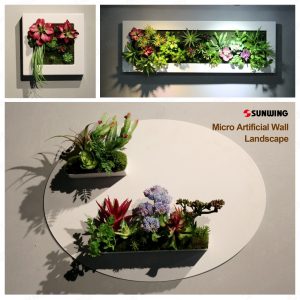 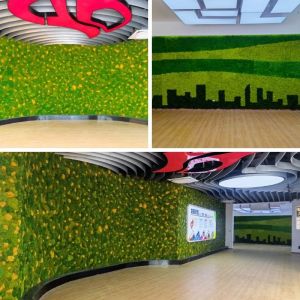 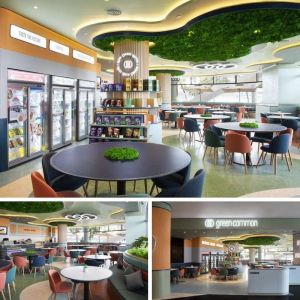 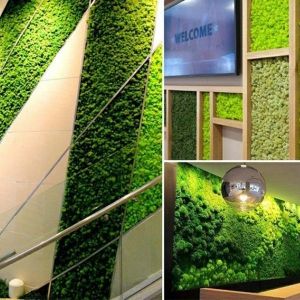 Get A Quote for Ur Business

Get A Wall Plants Quote

Get A Wholesale Catalog for Business

Get A Free Sample for Business